Hello, all! We are quickly approaching the end of the week..I feel like they are flying by! Today's throwback recipes are two I would like to make again soon to attempt a third picture that looks better than the second attempt at a picture :)

First up is a Taco Bell copycat! When  I was in high school and doing marching band, I lived on some Taco Bell - easy, fast, cheap...yep. I always got crunchwrap supremes. They are a little tricky to make at home, but with some practice, they get easier. The second time I made them was easier than the first. I wish I still had my George Forman grill though...I'd love to get some grill marks on this baby. Find the recipe here. 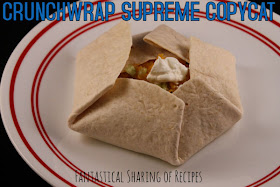 Next up is Creamy Chicken with Noodles. Oh look at all that blandness...doesn't it just look so one note? I promise it isn't! Not to be over critical of my picture because the first one was WAY WORSE (see the post)...but this one is so much more delicious than it looks. The chicken "sauce" is made in the crockpot and is just so creamy and rich and just thinking of it makes my mouth water. You can serve it up over your pasta of choice. I did spaghetti the first time, bowties the next few times. I think the shorter, thicker pasta works better with this one. 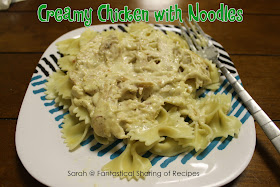