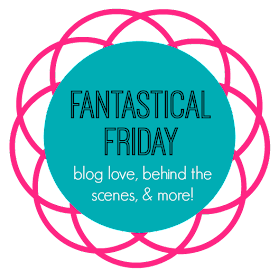 For those of you who may follow me on Instagram, you probably have seen little guy has made his appearance into the world! I'm late posting my Fantastical Friday - due to adjusting to having him home - plus apparently you can nest after you give birth, because I have been trying to clean and organize EVERYTHING! :) Please be aware the following is a looooong post and, nope, I have no problem talking dilation here. You were warned! 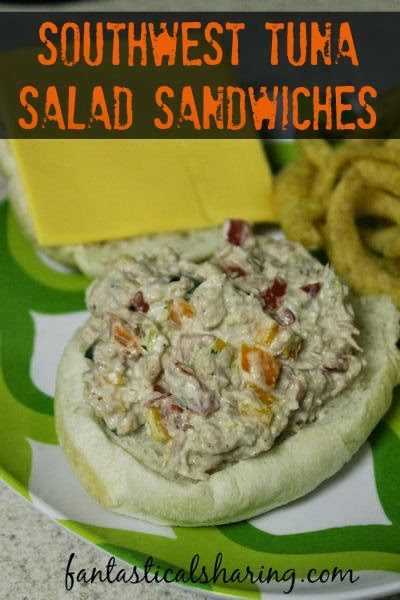 I am a sucker for a good tuna salad sandwich. I know it's not everyone's thing and that's okay, but man alive do I freaking love them! I've only really ever made them the traditional way with pickles and bare minimum everything. It was the same with chicken salad too and then I tried a different way with more seasonings and LOVED it. So I absolutely had to try tuna salad with a Southwest twist. This recipe came from one of my Secret Recipe Club hostesses, Debbi, and I'm so glad I found it and saved it. Next time, they will be served on bagels, which I have found is the best way to eat chicken salad and I'm sure that's true for tuna salad too. It is a nice crunch with the softness of the "salad" :) 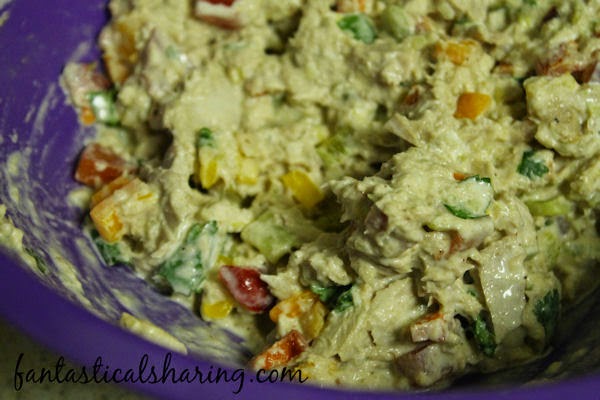 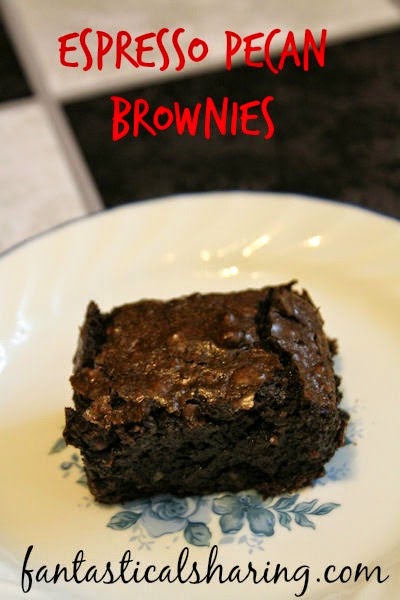 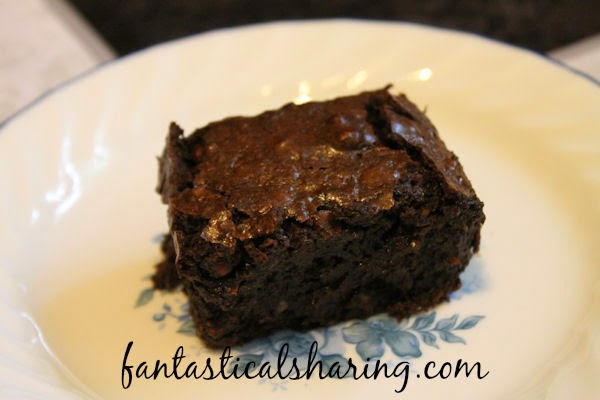 So every once in a while, I will get a mad, insatiable craving for one of two homemade treats: fudgy brownies OR chewy chocolate chip cookies. The struggle is real, guys. So what's a girl to do, but make the chocolate sinful temptation!! The particular day that I made these brownies, I had really wanted some coffee flavoring and nuts in them. I typically like nuts in brownies and chocolate chip cookies and I had some pecans on hand, so that was definitely going in there! When I am craving a dessert, I try to use a recipe that I haven't tried - so I adapted Sally's recipe for chewy, fudgy brownies into the espresso pecan brownies that I was wanting. :) And yes, these beauties did sate my craving!

I'm hoping that today's dinner will rival my mother-in-law's amazing pork roast, so that I can make something at home without begging her to make hers for Sunday dinners constantly LOL. I am also incredibly excited about soup night on Wednesday...Italian sausage, kale, and gnocchi - HECK YES!

It's time again for Secret Recipe Club reveal day for my group, Group D! What is Secret Recipe Club? It's a bunch of food bloggers separated into four groups that post once a month on a designated Monday. Each month, we are paired with another foodie from our group secretly (hence the name). We then pick a recipe (or two or more) from that blog and make it. On our reveal day, we reveal whose blog we had and what recipe(s) we chose all at the same time. It's like a Secret Santa every month, but with food and blogs! It's a great deal of fun :)

There's this Java Chip Smoothie - hello, yes! Turkey Stuffed Peppers look very good - I mean, you cannot go wrong with a stuffed pepper. Chicken with Bruschetta Veggies is something I cannot wait to try when my stupid chicken aversion goes away. I love seeing the different colors of veggies on that plate. Although not her own recipe, but a Secret Recipe Club recipe, I still would love to try the Chicken Florentine Meatballs. This Breakfast Scramble has kale and that means it already is going to be a favorite in our house. This recipe for Zucchini Bread caught my eye because of the nuts on top and its rustic look! If I ever get around to making breakfast again, I will be making Nora's Cinnamon Cappuccino Sour Cream Muffins. And the recipe that ALMOST won out from the one I chose was the Baked Quinoa with Pumpkin and Banana. I never ever get sick of pumpkin and I've been wanting to use quinoa in a baking recipe rather than savory recipes for a while now. I feel like all self-control would be out the window if I made this recipe though. 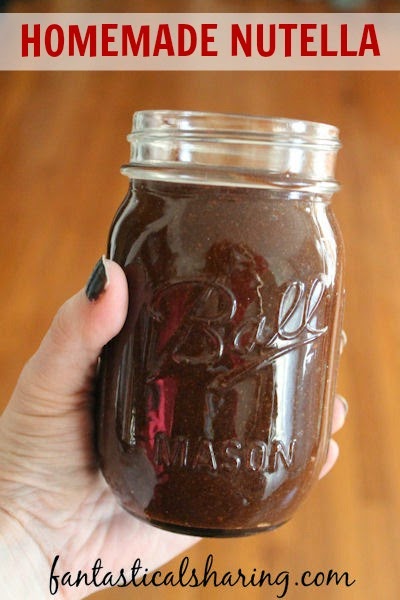 In the end, Chocolate Hazelnut Spread won out. I have always wanted to make homemade Nutella. I have had my Ninja system for a while and so it was time to break it out to make some homemade spread! I adapted Nora's recipe and did use refined sugar. I also added honey to the mix. Honestly, I could not tell you if I made it gluten free or not...or if any of it counts for being vegan/vegetarian, but I can tell you that it was quite amazing. 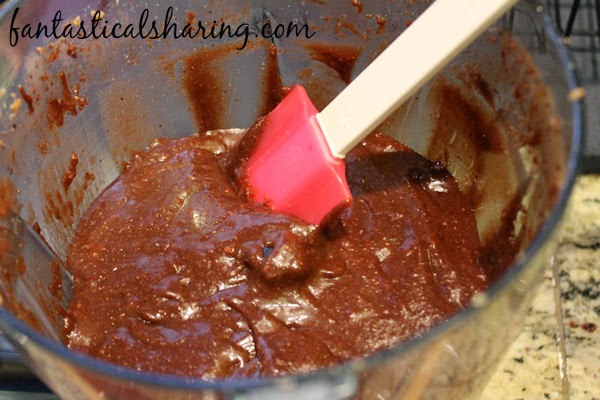 I want to try it again with utilizing less granulated sugar and toasting the hazelnuts prior to processing. I think it would turn out a little less gritty with those adjustments, but honestly, it was still every bit as amazing as I expected it to be. I filled a pint size mason jar with my spread and used the remainder in a no-bake cheesecake recipe for my daughter's birthday dessert that evening since we were having a family get-together to celebrate with cake and presents over the weekend. It was very very good in the recipe! 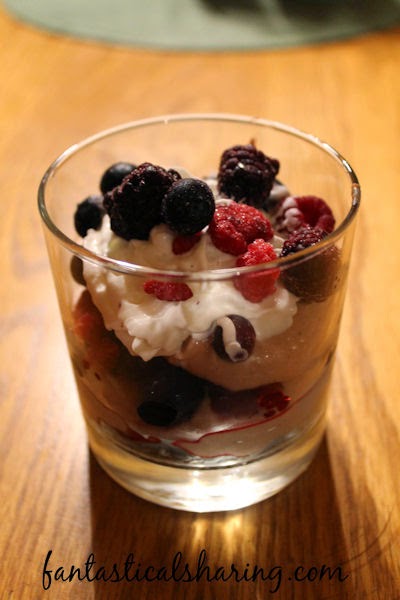 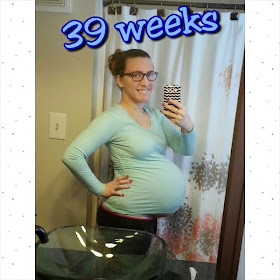 Yup, still pregnant.
Janie at 7:00 AM No comments:
Share 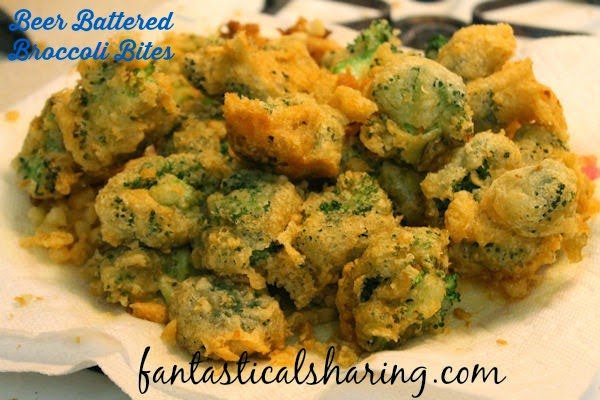 We paired these tasty little gems with yesterday's burger recipe - they are pretty quick to make and thankfully they use a wet batter, so there is no egg wash, flour dip, bread crumb dip, etc. It's very simple. Toss the broccoli in the batter and then fry them up! 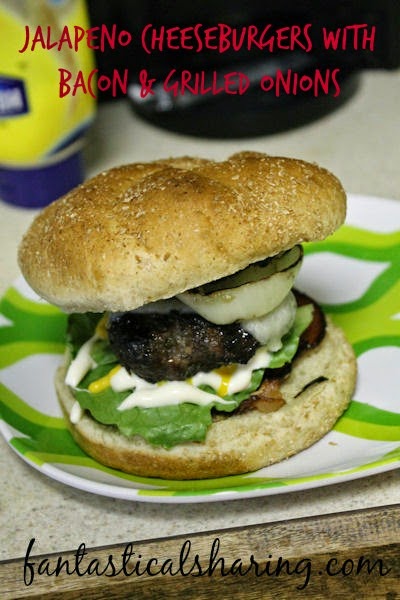 It's not grilling season yet, but being in Tennessee for the winter is making me antsy for it because I know it'll come much earlier than late May here! I used to make burgers with Worcestershire all the time, but eventually got burnt out and really now I just form the patty and do salt and pepper and that's it. While growing up, I was very accustomed to "bland", unseasoned foods. I think as an adult, I still do prefer some foods to be more simple and have the natural tastes come out and do their thing.

I actually planned to make this recipe for the jalapeno, bacon, and grilled onions. I didn't realize there was a glaze until I went to make my shopping list. A lot of times this happens when I see foods I want to make...I am a cover judger - both with books and food. A good picture will make me want to make the recipe. I decided to go ahead and do the glaze - what could it hurt?! I was very interested that it contained coffee.

That glaze is everything! It is the perfect smokey taste that every burger should have, plus a hint of sweet.

I'm really hoping that I don't go into labor this week because I have Friday's meal on my mind NOW. Wednesday's dinner has me really excited too. 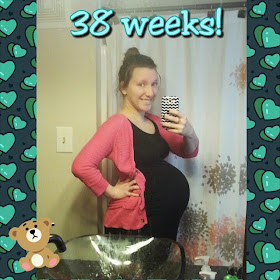 How far along are you? 38 weeks 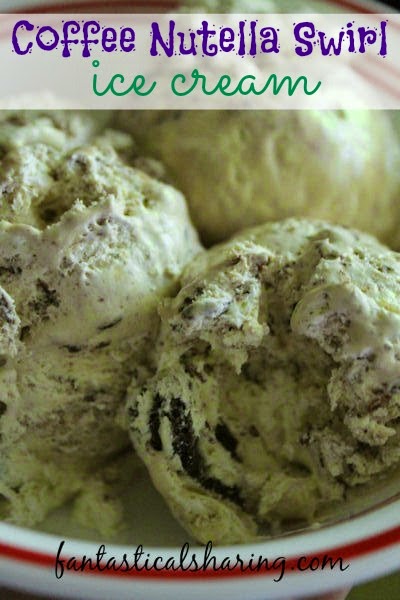 Over the last summer, I started testing out some frozen treat recipes. There was an influx of bloggers posting no machine recipes and it made me so excited! I had been wanting an ice cream maker, but still hadn't gotten around to getting one. Then my awesome hubby got me the ice cream maker attachment for my KitchenAid mixer for my birthday!

However, if you do not have an ice cream maker - this recipe is supremely amazing! Actually even with an ice cream maker, I'd totally make this again. It's delicious. Coffee and nutella - yum yum yum! The consistency is a little softer than ice cream from the store and it's quite rich, but it is so good. Very easy to make and very few ingredients :) 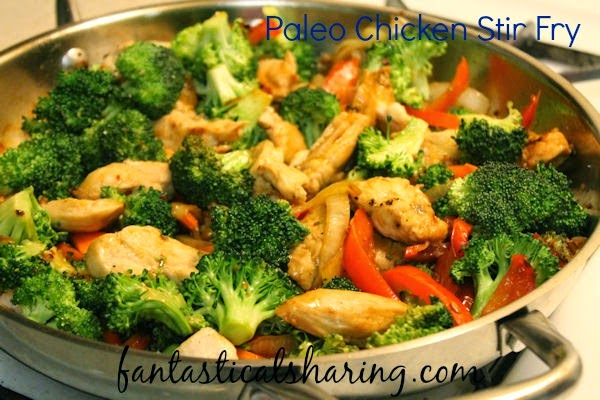 I subbed soy sauce, cornstarch, and olive oil out for the coconut aminos, tapioca flour, and safflower oil. I just now realized that this may negate the whole "paleo" thing. I don't know though because I'm not huge on different diet things. I just eat a variety of food and try to make as little from prepackaged boxes as possible. So below is how I made it with how to make it truly paleo written in there too.

This week is my daughter's 7th birthday - SEVEN. She chose pizza and cookies & cream cake for her birthday, so that is sure to be good :) Hoping that little man stays in my belly a little bit longer and we can make it through the week before he decides to come.

I love love love to meal plan. I started doing it when I was 16 and worked to pay for groceries for myself, mom, and little brother. I learned right off the bat to plan to save money. It's the only way. Plan what you are going to buy to avoid buying a bunch of crap that you can't eat for dinner! :) I shared 5 tips and go-to recipes years ago when I did a blog swap and those are still pretty accurate, but I have updated my methods. 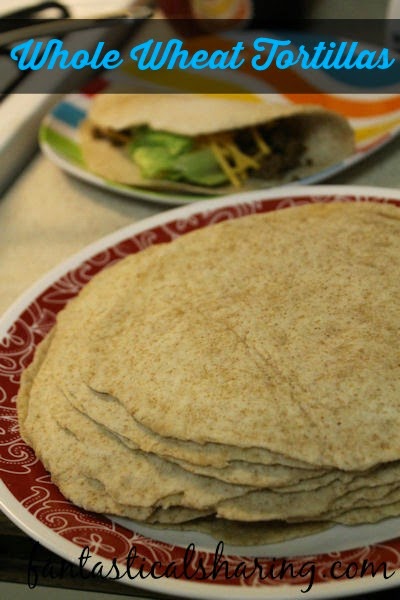 I have been wanting to make tortillas for the longest time. I got really intimidated by the process and I'm honestly not sure why. It's basically like making pizza dough and then cooking it like pancakes. It's not THAT difficult. Once I got the courage to make them, I'm so glad I did. I had to keep myself from eating the ones that were done so that we could have tacos for dinner.

I decided to use the whole wheat flour I had on hand. This was right before we moved last summer (yeah...still trying to catch up on recipes I made THAT long ago) and I didn't want anything to go to waste. They turned out completely fine and were delicious! I need to remember to make them more often! 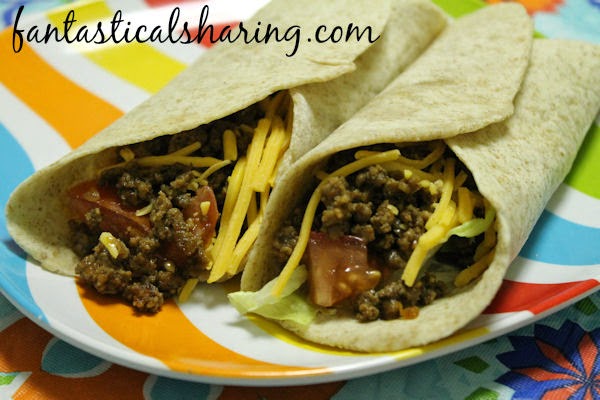 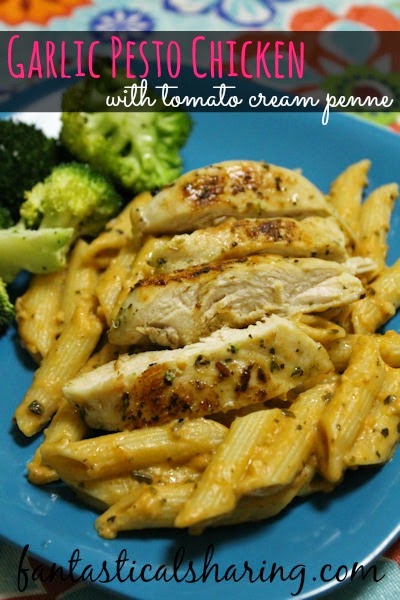 Can we just talk about how it's February already?! I tell you what - I'm ready to be able to enjoy chicken again! Pregnancy has not been kind to chicken this go-around and I torture myself with drooling over recipes like these and expecting it to taste like it should, but then have pregnancy hormones make it taste like microwaved leftover chicken :(

Until this baby is out and my hormones are back to normal, I will just dream about this chicken. The marinade is one of the best ever - it's got pesto, so it's gonna be amazing! I love the tomato cream sauce. It's very flavorful and goes with the chicken perfectly. It's not really a time-consuming meal to make either, so that's a plus. I believe when I made it, I cooked my chicken in my stainless steel pan and then did the sauce in the same pan, so it got flecks of the chickeny goodness in it. 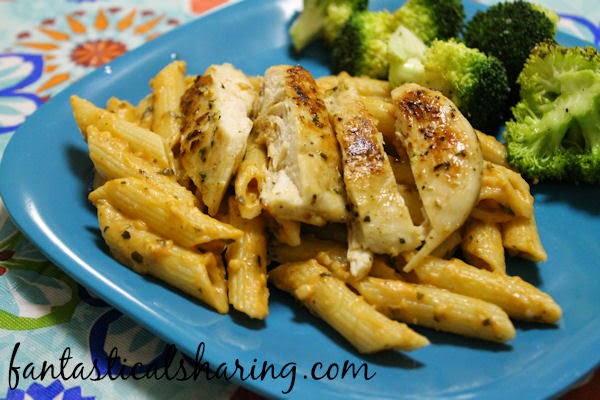 This week, I'm doing some more "difficult" recipes, but mostly because soon I won't be doing a lot of spending excessive amounts of cooking. It'll be quick & easy meals. Hopefully, I get around to making the breakfast meals because I haven't been doing that the last few weeks because I'm lazy. LOL