This lasagna is easy to throw together and has zucchini and bacon which is way better than regular lasagna in my opinion. 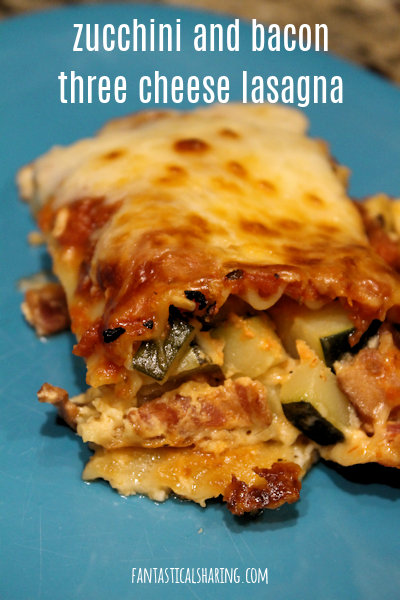 My family is not really largely amazed by lasagna. We rarely eat it. However, because I know that a good recipe can turn me into a fan of foods I previously did not like, I have a few saved to try. This one seemed like it could be a keeper because of the lack of ricotta cheese. I think, personally, that is the reason why we don't like lasagna. I can't say that zucchini and bacon weren't also selling points for this recipe. It was a pretty easy recipe to throw together and did not take hours like some lasagnas can. It seems like everyone really enjoyed it too. 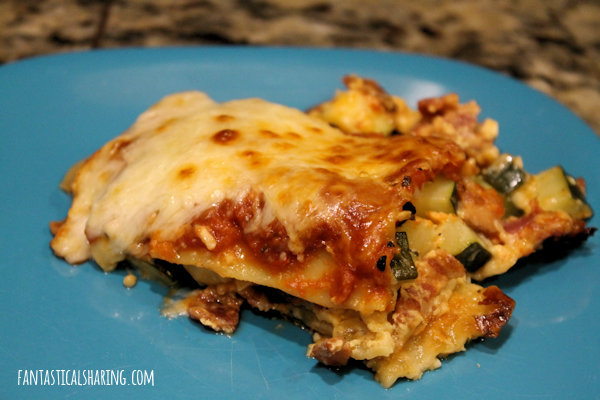 Wow, July flew by and August is upon us - what happened?! In August, I'm going to try my hardest to make all the breakfast recipes and all the dessert recipes, something I have failed to do for months and months now. I only plan for two breakfast recipes a week and one dessert and man...I have just not made those recipes.

These pork carnitas are slow cooked in a delectable spice mix and broiled for a slight crispiness! 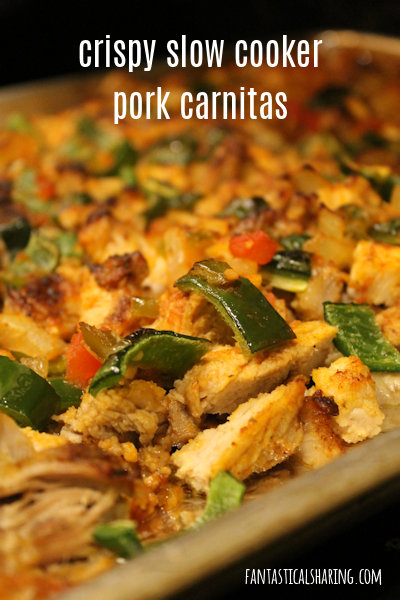 I really appreciate slow cooker recipes the older my kids get. We seem to always have something going on and I feel it's definitely going to get busier when I finish my degree. This recipe has the slow cooking element and then you have to do just a teensy bit of work when you shred it and throw it onto a sheet pan to broil for a little crispiness. I love love love the poblanos added to the mix too. The spice mix is wonderful! 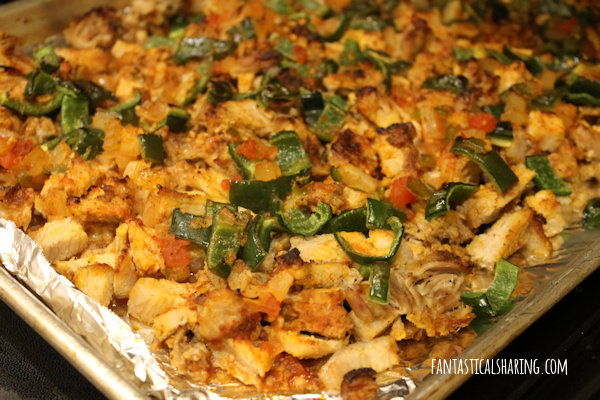 A bite of pizza atop zucchini slices is the perfect low carb snack. 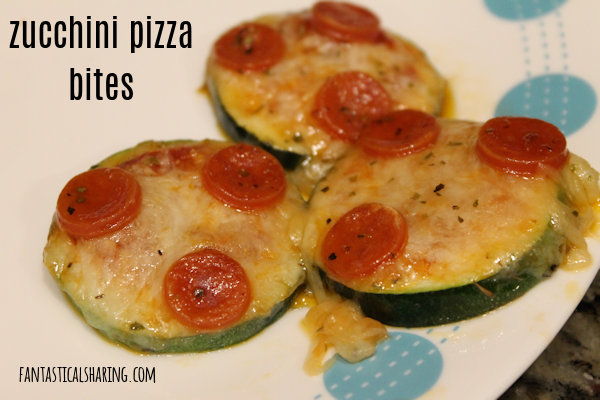 Nick did the keto diet last summer and when we decided to have a junk food/fried food night, I was at a loss for what to make that wasn't breaded. This was an easy pick that fit the low carb category and was relatively inexpensive to make. I love zucchini, so I was game for this recipe. No, these aren't bagel bites, however, they are still delicious little pizza treats.

July was going by so quickly until I ran out of college for my term. New term starts the first of August, so I'm trying to get ahead on blogging because I've definitely let it fall to the wayside. This week, you may notice many pineapple dishes towards the end of the week. This is due to the fact that my oldest will be out of town and since he is allergic to pineapple now, we are eating all the pineapple foods while he's gone. I wouldn't dare eat Hawaiian pizza in front of him because it was his absolute favorite pizza, so we'll do it while he's gone.

Pizza has never tasted so good with this garlicky sauce, grilled chicken, and bacon! 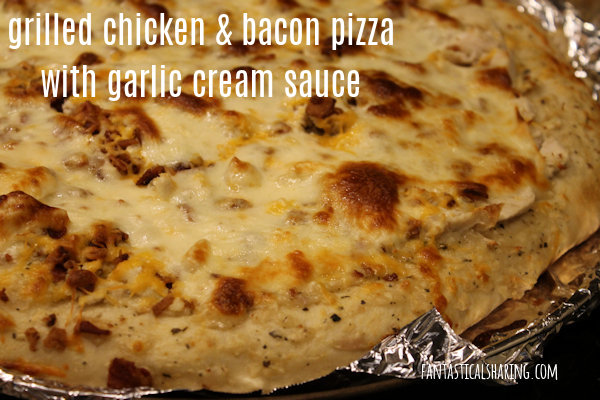 I don't make a lot of chicken pizza simply because a lot of the bases are ranch and the boys will not eat ranch period. This pizza recipe caught my eye because of the garlic cream sauce. I am definitely one of those people who puts 8 to 10 cloves worth of garlic into most recipes because I love garlic. Thankfully, Nick and the big kids do too. You can never go wrong with bacon too, so I knew this would be a keeper. I opted for the wine for the sauce and used a pinot grigio and it was fantastic. 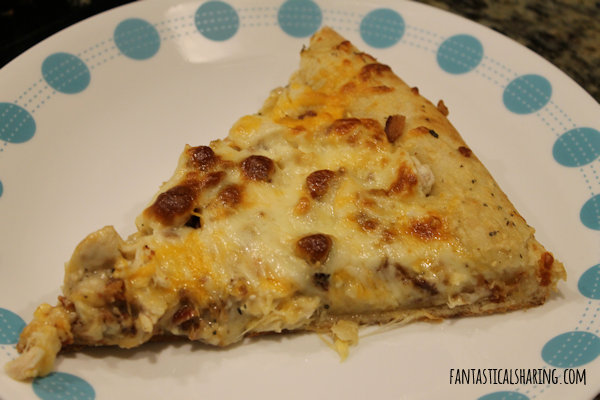 Welcome to another Food Fight! Fantastical Food Fight is a group of food bloggers who will get a theme or ingredient each month and make some sort of variation for it. It could be traditional or nontraditional and can be found in a cookbook, on a blog, or be a blogger's own creation! For more details, check out this page.

This month's Fantastical Food Fight theme is ICE CREAM. I was gifted an ice cream attachment for my stand mixer for my birthday in 2014 and if I'm being completely honest, I've only used it a handful of times and I definitely feel a little guilty about it. Don't even get me started on the pasta attachment I received for Christmas 2014. Since there wasn't a stand out theme or ingredient for July, I thought ice cream would fit really well. The caveat being that we would stick to ice cream - no gelato, froyo, sherbert, etc. It could, however, be made in an ice cream machine or a no churn recipe, which are the coolest ever if you ask me! 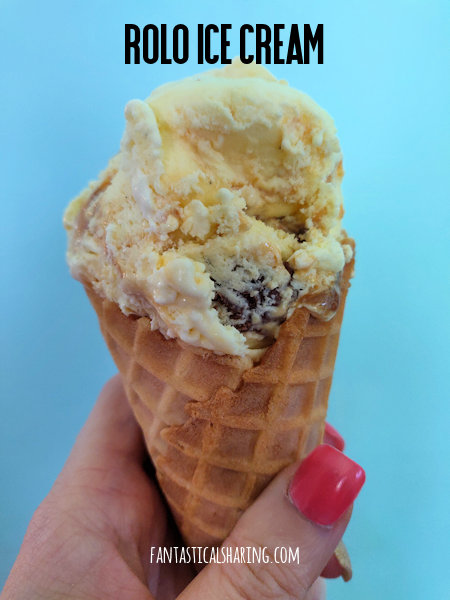 I did not have a recipe in mind when I picked the theme for the month. So I went straight to my frozen dessert board on Pinterest and tried to narrow down a few recipes. Ultimately, I decided upon this Rolo ice cream. The recipe came from My Baking Addiction and was adapted from an Alton Brown recipe. It was really helpful for me to watch the video of him making it so I could nail the process. I always get nervous when I have to temper ingredients. I did make a few errors (like dumping all the sugar into the eggs, instead of slowly) but miraculously, it turned out beautifully. It was super smooth and creamy. Very light and luscious. I would only change one thing and that is to fold the rolos in with the caramel sauce instead of throwing them into the ice cream maker when it was in soft serve stage. We ended up with a few balls of chopped Rolos and they are not too nice to your teeth when they are frozen. 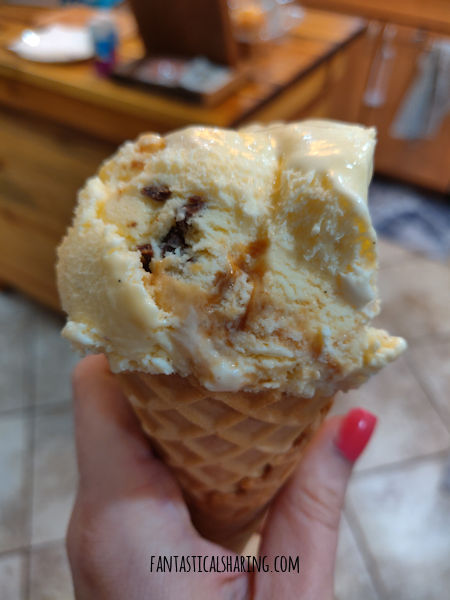 We're undergoing some transitions in the household this week with Nick working from home (unless he travels) for his new job. I may end up throwing a few lunch recipes into the mix next month! Cami (my 11 year old) has been my sous chef lately, so I'm sure she will be assisting this week for more than just her recipe for Friday. I went grocery shopping yesterday and was unable to find blackberry pie filling, so the dessert will be peach!

This roll-ups recipe is pretty easy to make but the alfredo sauce is not to be underestimated. It is the very best alfredo sauce I have ever eaten. 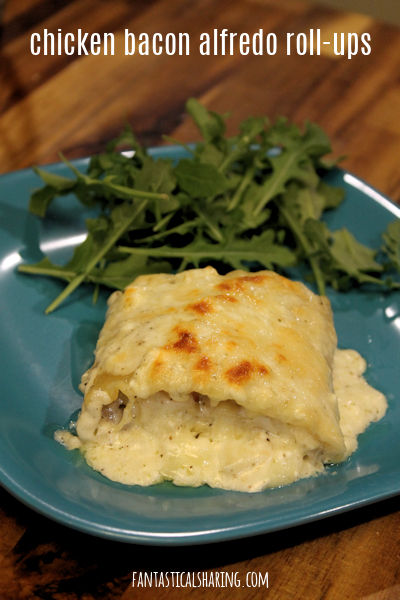 I have made this recipe like a million times because I struggle to get a good picture of food that is really white and saucy. This is about the best I could get but I just want to say that I am not at all bummed out that I had to make this over and over to try and get a better picture. The part of this recipe that really makes it an all-time favorite is the garlic alfredo sauce. It is literally the very best alfredo sauce I have ever had. I make it for other recipes now or just on the fly when we want some alfredo sauce. 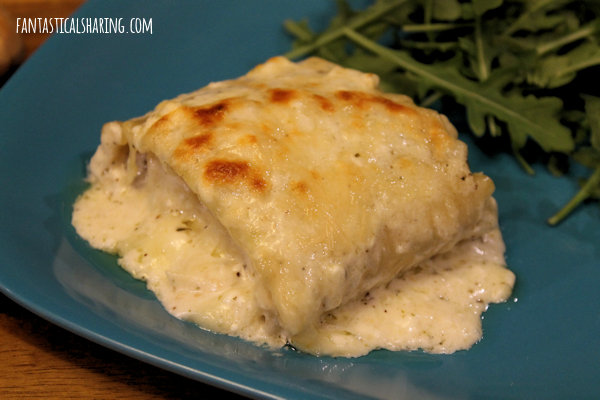 Cobb salad has never been so good with grilled chicken and asparagus and roasted corn and tomatoes. 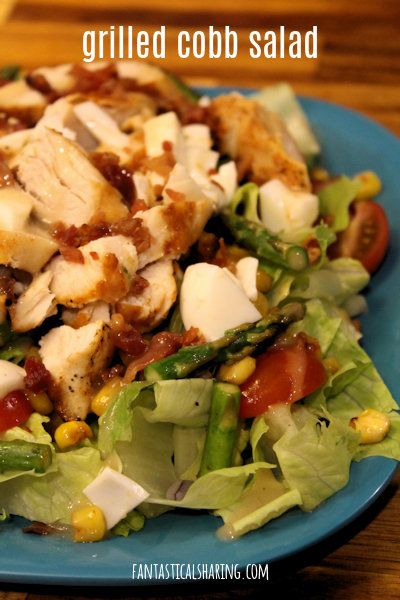 Cobb salads are probably my favorite kind of salad because I love that there are eggs and bacon in them. This particular cobb salad is perfect for summertime because you can grill the ingredients. I chose to sub in canned corn and roast those with tomatoes in the oven instead of grilling. I did grill my chicken and asparagus though. 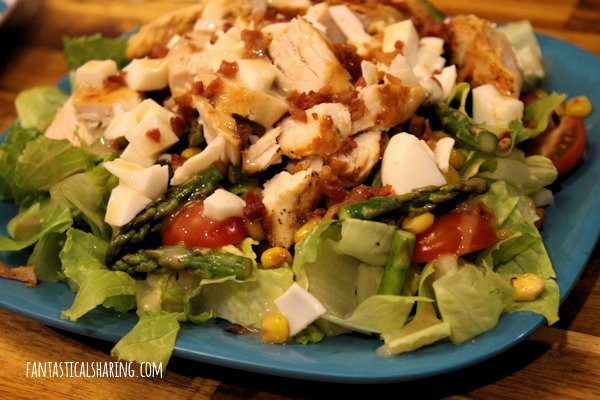 My 11 year old, Cami, loves to cook too and broke out her cookbooks for the meal plan this month. Going fairly easy this week since Nick will be gone for most of it :)

This breakfast is fruity, nutty, and 100% wonderful. 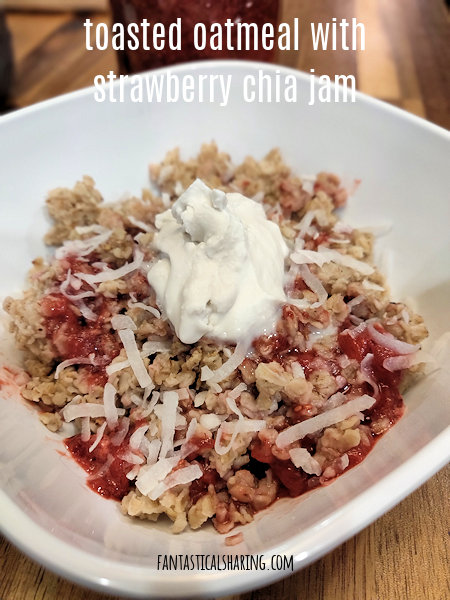 I am so excited to share this recipe today because it's one that kinda blew my mind. I love oatmeal and I love mixing in fruit ingredients into oatmeal whether it's fresh fruit, yogurt, etc. This was my first time mixing in jam and it was homemade (really easy to do). The toasted oatmeal was amazing and coconut everything was a nice touch. 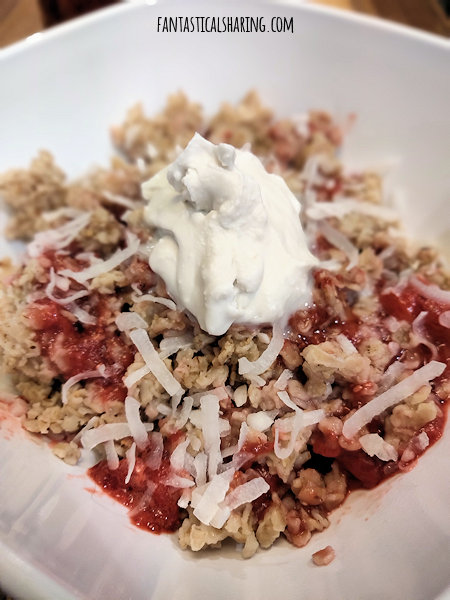 Summertime means time for zucchini and these zucchini boats are stuffed with delicious bolognese and topped with pesto. 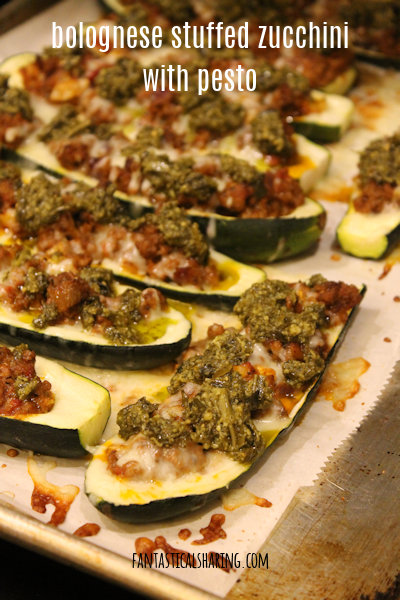 I finally have had luck with finding zucchini in the summertime. For years, it seems like zucchini...which is a summer squash...was completely MIA in the summer. I like to plan lots of zucchini recipes when it's available because it is my favorite veggie. This recipe was high on my list because I adore bolognese and pesto is my life blood (as I have stated many-a-time). It was everything that I could have wanted and it's the perfect summer dish! 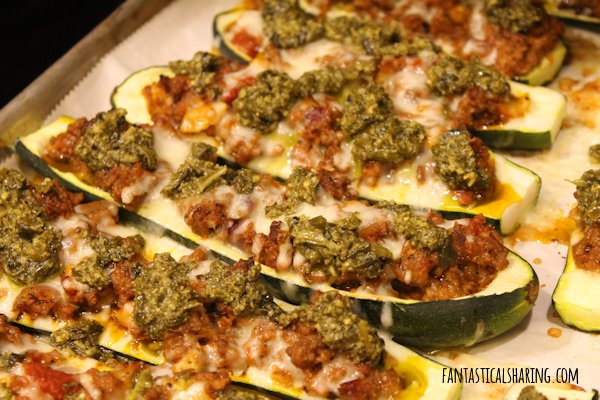 We don't have plans for the fourth, but I figured grilling out some steaks would be nice :) A lot of this month's meal plan was picked by my kids, so there isn't too much new stuff going on.